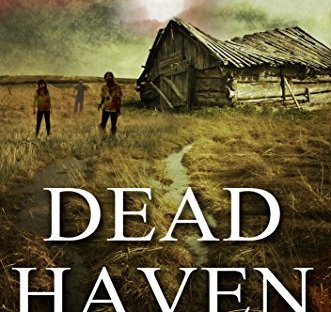 Dead Haven is another zombie story, but there’s a little more to it than just killing dead guys who won’t stay down. It starts with Jack Jupiter, who hates his home town and growing up there had been the worst time of his life. Unfortunately, his mother dies and he is the only one to arrange her funeral. In actuality, it’s nothing more than a burial. Fortunately, Darlene, the woman he loves more than anything or anyone, is present and helps make the ordeal bearable.

Jack hasn’t heard from his older brother, Norm, in a very long time and he’s fine with that, seeing that Norm had been their mother’s favorite. As the older brother, he had enjoyed being a constant trial for Jack while they were growing up. To make matters worse, he considers it unusually bad luck when Norm calls and says he’ll be at the burial. Jack is not ready to confront his brother and insists he leaves. Norm, after all, is not the one who took care of their mother and it aggravates Jack to no end that Norm will appear and act as the favored son, once again.

After the funeral, Jack figures they’ll have to eat eventually and heads off to the nearest mom and pop grocery story. He prefers to keep a low profile, but sooner or later he will be recognized as the successful zombie author he is. At the store, he is noticed by an old school bully who asks Jack about his success. He decides that belittling his former tormentor is the best way to handle the situation and announces that he’s disgustingly rich, and this once upon a time bully proceeds to beat the stuffing out of him. Jack limps back to the motel where Darlene waits. She tries to soothe his battered ego, but this is the final straw and he elects to work out at the gym owned by an old school friend, even though he despises working out.

This is where the zombies make their debut and where said bully’s father happens to be at the same time. You have probably guessed he is going to cause Jack all sorts of trouble, because he is a gem much like his son. As a group, they decide to sit and wait for rescue. Except Jack is not in agreement. He is terrified for Darlene and wants to get back to her. It’s amazing what a group of petrified people will do. Argue is first and foremost. They also look to Jack, since he’s a well-known author of zombie tales. That belief won’t get them far, as he has never actually encountered one and never expected to. This is an opportunity for Jack to show what he is made of. When pushed to lead, he doesn’t turn away, but attempts to lead a cantankerous, frightened group of people through the zombie apocalypse. Although Jack is a disappointment to himself, he actually comes across as someone who will do what needs to be done. All in all, he is not a letdown for the reader nor the book.

I will be honest here and say that although I liked this storyline, I read the sequel and found it to be a more interesting book. For book one, I give it ⭐️⭐️⭐️ stars. Start here and keep going.