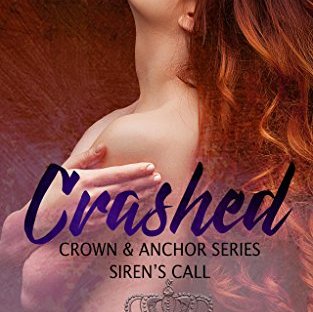 As the title ‘Crashed’ implies, this is not an easy read and deals with the aftermath of the first book in this phenomenal series. It has moments of beauty, pain, anger, regret, and caused me a lot of frustration. After finishing Casper’s Ghost, I was dying to get my hands on this one. The wait was blessedly short, but still felt too long, as I was overwhelmed with the need to know what happened next.

The story is the opposite of the first book. While Casper’s Ghost had a good deal of interaction, this one focuses on the individuals. I was thrilled that China saw a lot more action. She’s a magnificent character and now I’m anxiously waiting for her book to come out. The first allowed readers a hint at her strong, sassy character, but this one did her justice, allowing her the freedom to become a fully fledged member of the series. Whiskey is another nice touch, although he is not included in much, I got a good sense of his upbringing and his reasoning behind his decision to stay away from the Crown family. Their stories will be wonderful additions to this series.

I admit I was frustrated for a long while. I had expected more one-on-one between Wyatt and Circe, but the story is so much more than that. It is the back story and emotions of each character outside of their relationship and how it affects them as an ‘us’. Wyatt is allowed a lot of time for introspection and, due to his manic depression, suffers a lot with his heightened emotions. It was difficult to read about his struggles to survive and deal with his past and his regrets. I was ecstatic to finally discover the secret of Circe’s past. It was brutal and brought tears to my eyes. The fact that these lovers are kept apart while they deal with these issues is a strength to the story, even though I longed desperately for them to come back together. It was more than worth the wait.

The story is well-done, but it is the author’s writing and connection to her characters that really drew me in. I could feel what they were feeling and it is apparent that the author was fully invested, loving them as much as I do. This is not your typical love story and must be read after Casper’s Ghost, but is a perfect finish for their tale. The story is quick and short, but fulfilling. I did not want for anything, as this book had it all. When I came to the end I was sad that it was over, but I was relieved to finally see the power of their love.

Now, for the rating:

I love the series and I love this book. It is a perfect follow-up for Casper’s Ghost and is unique in its own beautiful way. It opened my eyes to the mental anguish of someone with Wyatt’s condition and the aftermath of a great tragedy. I’m excited to give it ⭐️⭐️⭐️⭐️ stars. This is one that will stick with me.