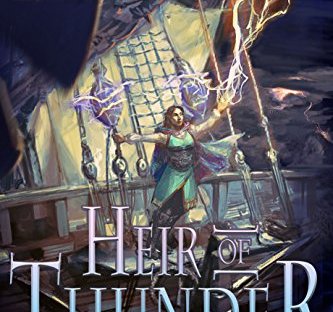 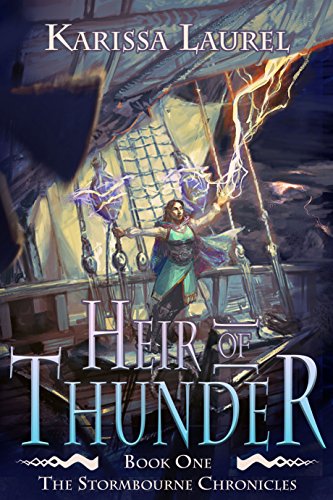 When Evelyn Stormbourne finds herself on the run with her deceased father’s horse master, Gideon, she discovers she has nothing to lose but her life. Her inheritance, the throne of Inselgrau is destroyed by rebels, her home is lost to a fire, and the servants she has known all her life are stripped away, as they run for their lives. All she can do is rely upon Gideon, who claims to have promised her father to protect her, if the need ever arose.

Evie comes from a long line of Stormbournes. Their incredible skill is that they can control thunder, lightning, and rain. For Evie, at seventeen, her father had just begun her training when he dies. So, she has a power that she can’t always control; when she’s angry a storm soon appears and she can direct lightning only if she concentrates. Unfortunately, there is a lot more to her power that her father had not touched upon. At the age of eighteen, Evie will come into the full extent of her power, but is ill-prepared for it.

Evie and Gideon have a wild ride across country, followed by her father’s traitorous armed guards. Gideon has warned her to never reveal who she is and at one point sends her ahead to find an inn, while he stays to fight. He arrives at the inn, obviously wounded, but prepares as quickly as he can for the last leg of their journey, which is a seaport in Braddock, where they will sail to Dreuth. Gideon has finally explained that she has family there that her father failed to mention to her.

During a storm, Evie falls overboard and is quickly lost. In time, she is pulled from the sea, sunburned and dehydrated. Her rescuers speak a language that is foreign to her, but she gets the gist when she is pushed into a cage and finds several other women in the adjoining ones. Her heart sinks, as she realizes her rescuers are actually slavers. The story only builds from there, as adventure ensues and revelations are brought to light.

I highly enjoyed this book. It is well-written and there is never a dull moment. In the beginning, I thought Evie would jump into Gideon’s arms and basically I would have a very long story to read. Not so! There is continuous action and she proves to be a very resourceful young woman. I definitely recommend this book even though it is YA. Adults will enjoy this adventure, too.

Now for the rating:

Overall, I give this book ⭐️⭐️⭐️⭐️ stars.